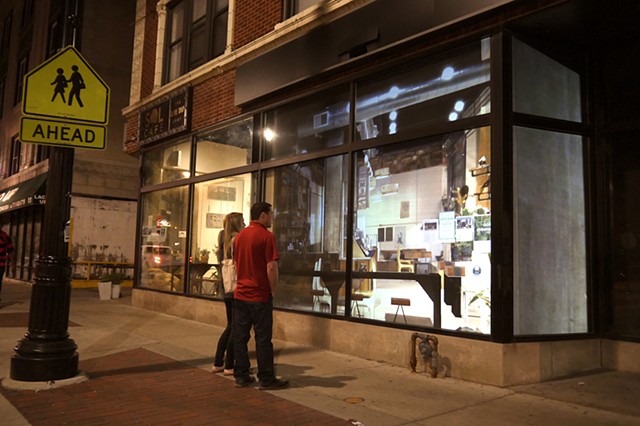 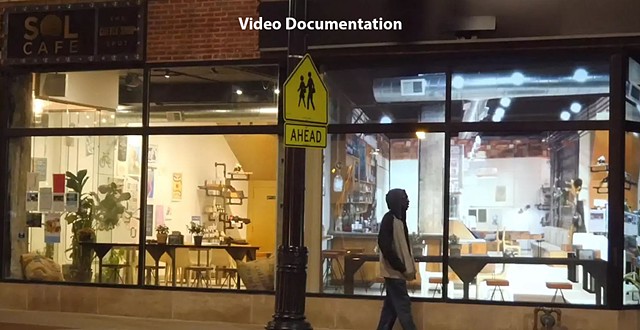 This is the second in a series of storefront video installations. The work features a video projection that displays the interior space of coffee shop that is situated directly adjacent to the business space to which it refers. As the audience moves in front of the window, objects in the scene shift in perspective relative to the viewer's change in position.

Le Corbusier noted that “Architectural structure… is in most cases a wall with holes for doors and windows; these holes are often destruction of form; they must be made an accentuation of form.” This installation and other works of the same series reference and sometimes highlight such openings in the building’s structure, while also challenging the perception of the building as an immalleable form.

The conjoined rooms pair the virtual and actual in a semi-mirrored display of the other. Through their opposing windows, one offers the function of the tactile world, inviting the individual to enter its physical enclosure. In contrast, the opposing digitally mediated space extends out to the viewer, responding to his or her movement while also dictating an engagement that is exclusive to the architectural form that bounds it. While revealing and hiding various elements of the room, the work produces an essence of realism while engaging in a dialog between image and form.

As the boundaries of the video screen and digital photograph are steadily and stealthily becoming a primary framing mechanisms for how we see, such borders have encapsulated the narratives present in cinema and video games for many years.

My goal is to develop a negotiated engagement with the audience that considers the social impact of such media while questioning interpretations of form, mass, and surface. As viewers interact with the work, I seek to provoke questions about spatial openness and personal belongingness, while referencing our socially fraught drive toward hyperrealistic digital media.